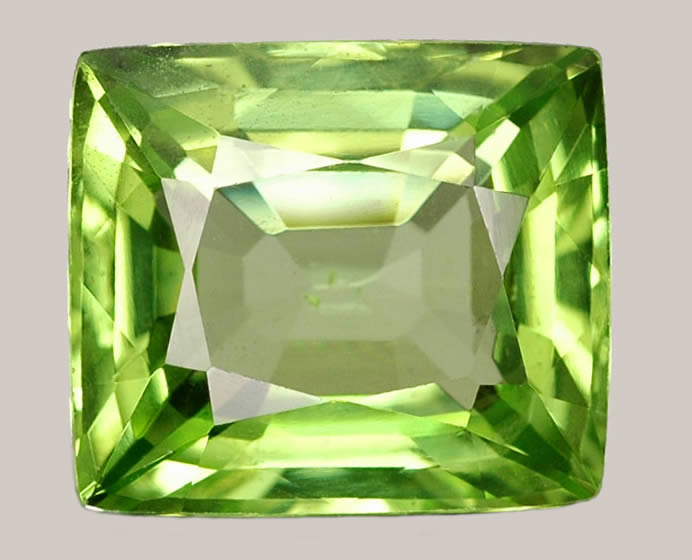 The vivid green of the peridot, with just a slight hint of gold, is the ideal gemstone colour to go with that light summer wardrobe. No wonder – since the peridot is the gemstone of the summer month of August.

The peridot is a very old gemstone, and one which has become very popular again today. It is so ancient that it can be found in Egyptian jewellery from the early 2nd millennium B.C.. The stones used at that time came from a deposit on a small volcanic island in the Red Sea, some 45 miles off the Egyptian coast at Aswan, which was not rediscovered until about 1900 and has, meanwhile, been exhausted for quite some time. Having said that, the peridot is also a thoroughly modern gemstone, for it was not until a few years ago that peridot deposits were located in the Kashmir region; and the stones from those deposits, being of an incomparably beautiful colour and transparency, have succeeded in giving a good polish to the image of this beautiful gemstone, which had paled somewhat over the millennia.

The ancient Romans too were fond of this gemstone and esteemed its radiant green shine, which does not change even in artificial light. For that reason they nicknamed it the ’emerald of the evening’. Peridot is also found in Europe in medieval churches, where it adorns many a treasure, for example one of the shrines in Cologne Cathedral. During the baroque period, the rich green gemstone once again enjoyed a brief heyday, and then it somehow faded into oblivion. 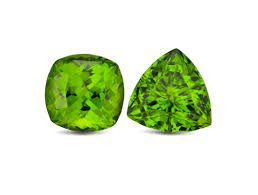 But suddenly, in the middle of the 1990s, the peridot was the big sensation at gemstone fairs all round the world. The reason? In Pakistan, up on an inhospitable pass at some 4000 metres (13,120 ft.), a sensationally rich deposit of the finest peridots had been found. In tough climatic conditions which permitted the gemstones to be mined only during the summer months, the unusually large, fine crystals and fragments were brought down into the valley. These stones were finer than anything that had ever been seen before. And the deposits were so rich that the demand for peridots can, for the present, easily be satisfied.

In order to emphasise the special quality of the peridots from Pakistan, these stones are offered as ‘Kashmir peridots’, following the famous Kashmir sapphires. Creative gemstone cutters have succeeded in cutting some fascinatingly beautiful one-off stones of more than 100 carats from some of the large, fine, clear crystals with their magnificent rich green!

How green? It all depends on the iron

The per
idot is one of the few gemstones which come in one colour only. The rich, green colour with the slight tinge of gold is caused by very fine traces of iron. From a chemical point of view, peridot is an iron magnesium silicate. The intensity of the colour depends on the amount of iron actually present. The colour itself can vary over all shades of yellowish green and olive, and even to a brownish green. Peridot is not particularly hard – only 6.5 to 7 on the Mohs scale – but it is easy to look after and fairly robust. Peridot cat’s eyes and star peridot are particularly rare and precious.

The most beautiful stones come from the border area between Pakistan and Afghanistan. However, the peridot as a gemstone also exists in Myanmar, China, the USA, Africa and Australia. Stones from East Burma, now known as Myanmar, have a vivid light green and fine inclusions with a silky shine to them. Peridot from Arizona, where it is popularly used in native American jewellery, often has somewhat yellowish or gold-brown nuances.

Uncomplicated, but not for the cutter
The peridot is cut in accordance with its crystal shape, mostly faceted or in classical table cuts, or round, antique, as an octahedron or oval. Smaller crystals are cut into standardised series stones, larger ones into imaginative one-offs. Cabochons are made if the material contains more inclusions, for the domed cut brings out the fine silky shine of the inclusions to their best.

The cu
tters know full well that this gemstone is anything but easy to work with. The raw crystals can be very tricky and may crack easily. There is often a good deal of tension on the inside of the crystal. But once the cutter has succeeded in removing the coarser inclusions, the peridot is a precious stone with good wearing qualities which does not call for any special care.

The peridot adds a wonderful variant to the colour spectrum of green gemstones. Increasingly, it is processed not only to one-offs, but also for use in series jewellery. And since the world of fashion is just in the process of rediscovering its love for the colour green, the popularity of this rich green gemstone is also very much on the up.

Thanks to the rich finds in Pakistan and Afghanistan, there is enough raw material on the market, so the ‘right stone’ can now be found to cater for each individual taste and each pocket. Large, transparent stones of an intense colour are, however, rare and correspondingly expensive. The peridot is a gemstone that you should definitely get to know better. Its fine pistachio to olive green is the perfect complement to a fresh, light summer wardrobe.