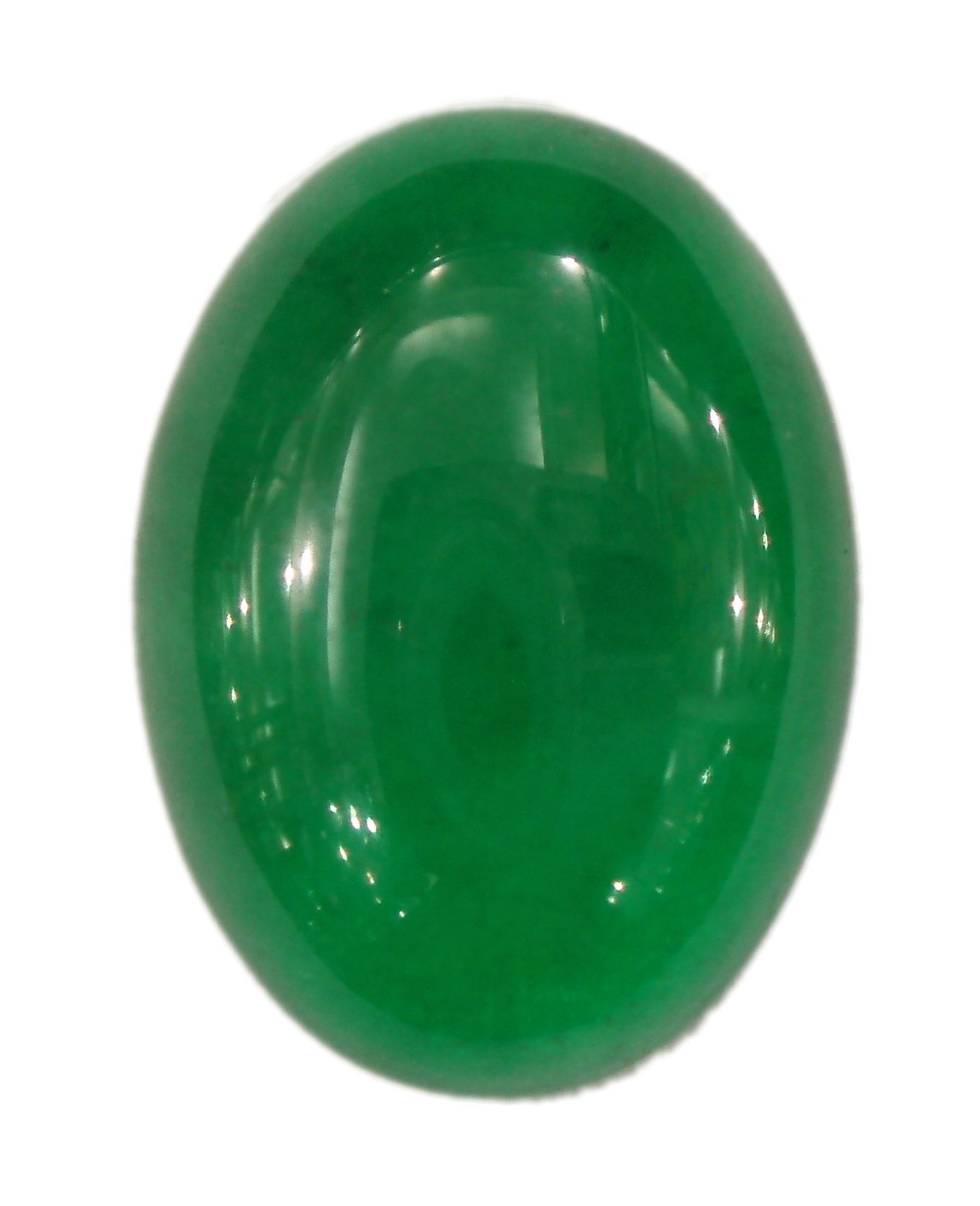 Jade – a gemstone of unique symbolic energy, and unique in the myths that surround it. With its beauty and wide-ranging expressiveness, jade has held a special attraction for mankind for thousands of years.

This gem, with its discreet yet rather greasy lustre, which comes in many fine nuances of green, but also in shades of white, grey, black, yellow, and orange and in delicate violet tones, has been known to Man for some 7000 years. In prehistoric times, however, it was esteemed rather more for its toughness, which made it an ideal material for weapons and tools. Yet as early as 3000 B.C. jade was known in China as ‘yu’, the ‘royal gem’. In the long history of the art and culture of the enormous Chinese empire, jade has always had a very special significance, roughly comparable with that of gold and diamonds in the West. Jade was used not only for the finest objects and cult figures, but also in grave furnishings for high-ranking members of the imperial family. Today, too, this gem is regarded as a symbol of the good, the beautiful and the precious. It embodies the Confucian virtues of wisdom, justice, compassion, modesty and courage, yet it also symbolises the female-erotic. A visit to the jade market, be it in Hong Kong or Rangoon, or at one of the Hong Kong jade auctions organised by Christie’s, can give some idea of the significance this gem has for the people of Asia.

However, as long ago as the pre-Columbian period, the Mayas, Aztecs and Olmecs of Central America also honoured and esteemed jade more highly than gold. New Zealand’s Maoris began carving weapons and cult instruments from native jade in early times, a tradition which has continued to the present day. In ancient Egypt, jade was admired as the stone of love, inner peace, harmony and balance. In other regions and cultures too, jade was regarded as a lucky or protective stone; yet it had nowhere near the significance that it had in Asia, which was presumably due to the fact that people knew relatively little about this fascinating gem. Fortunately however, in recent times, people’s understanding of this gem, which fascinates not only the connoisseurs by its perfect interplay of hardness and toughness with an enchanting range of colours and fine lustre, has improved; and their esteem for it has been on the increase all over the world.

‘Jade’, or yu, as it is called in China, is strictly speaking a generic term for two different gems, nephrite and jadeite. The name is derived from the Spanish ‘piedra de ijada’, loin-stone, jade having been recognised by the Amerindians as a remedy for kidney ailments. Because of its beneficial effect on the kidneys, the stone was also known as ‘lapis nephriticus’. That, indeed, is where the term ‘nephrite’ came from.

Jadeite and nephrite are both regarded in China as ‘zhen yu’, ‘genuine jade’. It was not until the beginning of the 19th century that mineralogists and gemmologists started to differentiate between them, since they bear a considerable resemblance to each other in terms of their appearance, their hardness and the properties they exhibit when being processed. Both are tough, since they consist of dense, close-grained, matted aggregates, but they differ from one another in their chemical composition and colours. Nephrite ranges mainly from mid to dark green or grey-green, but it can also be white, yellowish or reddish. Rarer, and somewhat tougher, jadeite displays hues which include green, but also white or pink, and reds, blacks, browns and violets. In both minerals, the way the colour is distributed varies a great deal. Only in the very finest jade is the colour evenly distributed. Both nephrite and jadeite often have veins, blemishes and streaks running through them, though these may not always be regarded as flaws. On the contrary, some of these patterns are considered particularly valuable.

Jadeite is rarer than nephrite and is therefore regarded as more precious. Nephrite deposits have been found in China, New Zealand, Russia, Guatemala and the Swiss Alps. Dark green jade, so-called Canada jade, is also found in Western Canada. Jadeite is found in China, Russia and Guatemala, but the best stones come from Burma, now known as Myanmar. There, at the annual ‘Gems, Jade and Pearls Emporium’, blocks of jade in all sizes are auctioned. When purchasing the raw materials, the dealers need to be fairly lucky, since the nodules, blocks and fragments are sold either whole or after having been cut into slices, and there is only a very small window, the result of some initial grinding. So the buyer cannot see exactly what is hidden on the inside: valuable green jade, or an almost worthless, speckled or streaky material. It is not until the cutting process begins that the real quality is revealed.

In the jade-cutting centres of Canton, Beijing and Hong Kong, the raw material is processed with carborundum and diamond powder. Since jade is, as a rule, not transparent, but has a fine lustre, the cabochon is the form best suited to it. Thin slivers, which can be worn as pendants, and jade bracelets are popular too. Round, cylindrical and flat shapes can be combined to make attractive necklaces. Traditionally, jade is processed into slender figures, filigree images or thin-walled vessels. This is sometimes erroneously referred to as jade carving. Unwanted material is in fact removed during the cutting process, and the stone is subsequently polished. Here once again we see the subtle difference between nephrite and jadeite: whilst polished nephrite has a surface with a resinous lustre, the glassy lustre of jadeite after polishing seems to shine almost like that of a mirror.

For collectors as well as jewellery lovers, jade is a fascinating gemstone. In Asia, above all, it is collected as an antique. Besides the quality of the gem and its processing, religion and faith also play an important role. In the West, many people prefer to collect jade in the form of snuff-boxes, cigarette holders, small bowls or rings. Since each collector has his or her own taste and his or her own likings with regard to colour, style and shape, it is no easy matter giving definite advice on the purchase of jade objects.

However, jade is, at the same time, a wonderful gem, not only in its traditional guise, but also in more modern designs. Especially in recent years, creative jewellery and gemstone producers have come up with some wonderful, up-to-date jewellery design, thus sprucing up the image of jade, which had had rather a traditional character for quite some time.

In general, the value of jade is determined according to its colour and the intensity of that colour, the vivacity and texture, and its clarity and transparency. Likings for particular colours vary very considerably from region to region and culture to culture. In green jade alone, the connoisseurs differentiate between seven main qualities, from the intense, even green of imperial jade, via apple green and spinach green, all the way to the lighter and to more heavily speckled shades of green. These special nuances often overlap and can hardly be recognised by the untrained eye. In the USA and Europe, emerald green, spinach green and apple green are regarded as particularly valuable. In the Far East, on the other hand, pure white or a fine yellow with a delicate pink undertone is highly esteemed. In the world of jewellery, the fine violet nuances of lavender jade are very popular. It is however the rare, emerald green of imperial jade, which shines through at the edges, a colour of incredible depth, which fetches the highest prices. Unfortunately, since not only good and natural jade is offered for sale, but often fake or poor-quality products or stones which have been coloured or otherwise treated, it is advisable to buy good jade only from reputable dealers and jewellers, whether the purchase is being made for a collection or as an individual piece of jewellery.

Symbolic energy and beauty, the traditional and the modern are combined in jade in a particularly harmonious way. And in gemstone therapy it is said that jade ‘stimulates creativity and mental agility on the one hand, while also having a balancing and harmonising effect.’ So this beautiful gemstone brings us joy, vivacity and happiness all at the same time – and what, in our times, could we possibly need more?