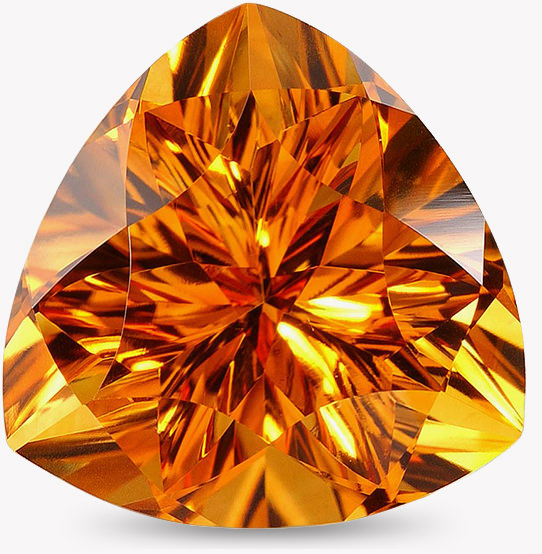 Let’s suppose that someone has bought a moped, yet his friends and acquaintances keep talking about his ‘wonderful racing machine’. He surely feels confused, or feels that they are taking the mickey out of him. A moped was exactly what he wanted for short trips in good weather, but even the salesman said that he was now in possession of a ‘real flyer’.

That’s roughly how things go with the citrine, the stone for the month of November. Many people have come to know and love this stone under the name gold topaz, or Madeira or Spanish topaz, although in actual fact it has very little in common with the higher-quality gemstone topaz – except for a few nuances of colour. Thus the history of the citrine is closely interwoven with that of the topaz, and coincides with it completely when it comes to the interpretation of alleged miraculous powers. However, the citrine is a member of the large quartz family, a family which, with its multitude of colours and very various structures, offers gemstone lovers almost everything their hearts desire in terms of adornment and decoration, from absolutely clear rock crystal to black onyx. And it does so at prices which are by no means unaffordable.

The name is derived from the colour – the yellow of the lemon – , although the most sought-after stones have a clear, radiant yellowish to brownish red. Like all crystal quartzes, the citrine has a hardness of 7 on the Mohs scale and is thus, to a large extent, insensitive to scratches. It won’t immediately take offence at being knocked about either, since its cleavage properties are non-existent. Even if their refractive index is relatively low, the yellow stones have just that mellow, warm tone that seems to have captured the last glow of autumn. Like golden Rhine wine or sparkling Madeira, heavy and sweet, citrine jewellery shimmers and brings a hint of sunshine to those dull November days.

There are not many yellow gemstones in the world of jewels. A diamond or a sapphire may be yellow – those will be expensive -, or sometimes a tourmaline or chrysoberyl, though these tend toward green somewhat, a golden beryl or eben a pure topaz, which we will mention again later on. However, the citrine fulfils everyone’s colour wishes, from lemon yellow to reddish brown.

Rare though it is, yellow does in fact occur in quartz in Nature, if seldom, when there are traces of iron in the silicon dioxide. Historically, it has been found in Spain, on the Scottish island of Arran, in France, Hungary and in several mines overseas. Perhaps the citrine wouldn’t have been talked about any more at all if, in the middle of the 18th century, it had not been for the discovery that amethysts and smoky quartzes can also be rendered yellow by so-called burning. This heat treatment at temperatures of between 470 and 560 degrees has to be carried out very carefully and requires a great deal of experience. However, in the course of 200 years, its application has become so much a matter of course that most of the stones available in the trade today are in fact burnt amethysts or smoky quartzes. Only a trained specialist can recognise the signs of heat treatment at all, burnt stones having subtle stripes whilst the yellow of natural ones is cloudy.

In Europe, the boom on these yellow to reddish crystal quartzes didn’t begin until, in the 1930s, expatriate agate cutters from Idar-Oberstein sent large quantities of citrine back home, along with amethyst and agate, from Brazil and Uruguay. Thus the golden-yellow quartzes made a contribution to Idar-Oberstein’s becoming – and remaining – one of the world’s great gemstone centres. Just as they had been used to doing with agate and other kinds of quartz, the cutters faceted the citrine using large, rotating sandstones over decades. The raw stone was actually held in the cutter’s hand during this process. If you give that a little thought, it will occur to you just how skilled the cutters from the Hunsrück really were.

The supply of Europe with sufficient raw material came just at the right moment for the nascent upheaval in social conditions. As the bourgeoisie grew in strength, the demand for jewellery across a broader spectrum of social strata also grew, and the citrine found a permanent niche for itself. Since until then it was really only the topaz which was known and used as a gold-coloured gemstone, the yellow and brown crystal quartzes quickly became very popular among the ladies, being known as gold topaz or smoky topaz, or by the double-barrelled names that proclaimed their origin. However, they were also found in step and table cuts as cuff-links and rings in the evening wardrobe of fine gentlemen. At the beginning, perhaps, the notion “it’s all on the surface” may have played a part. But there was no other stone to which the wrong name clung as doggedly as the citrine. Even now, jewellery enthusiasts with no specialist knowledge may be astounded when you tell them that their ‘gold topaz’ is a citrine, in other words not a topaz at all, but quartz.

So what is it that constitutes the difference between the real topaz and the citrine? A fluorine aluminium silicate in chemical terms, the topaz is considerably harder and heavier than quartz, and it has a higher refractive index, which endows it with more fire when the colour is good. It does have one weakness: its good cleavage qualities, which must be taken into account when it is being worked on. It can be found in all the colours of the rainbow and has been known to Man for at least 2000 years. It has not been proved beyond doubt whether the name comes from Sanskrit or Greek, though the Greek name ‘topazos’ means ‘green gemstone’. The Romans dedicated the topaz to Jupiter.

The colour in which the topaz is most commonly found is yellow, and that is the colour in which it occurs in one of the major German gemstone rocks, the Schneckenstein (a topaz-bearing rock said to resemble a snail) in Saxony. In the 18th century, it was mined there during a period of over 60 years. However, most of the crystals were hardly a centimetre in diameter. You had to go to Siberia or Brazil to find crystals as large as your fist. Having said that, anyone who is interested can convince himself of the beauty of cut specimens in the topaz set in Dresden’s Grünes Gewölbe (Green Vault). The enormous and magnificent topaz from the Portuguese crown, the Braganza, was for a long time thought to be a diamond.

In mysticism, the topaz is attributed with a cooling, styptic and appetising effect. It is said to dispel sadness, anger and nocturnal fears, to warn its wearer of poisons and protect him or her from sudden death. It is reputed to make men handsome and intelligent and sterile women fertile and happy. However, it is probably better not to rely too much on its magical powers, since it was also claimed that you could immerse your hand in boiling water after a topaz had been thrown into it and retract it again unharmed!

In the Empire style, the topaz was still widespread, but then the more reasonably priced citrine took over from it and even usurped its name. Since then, the topaz has been a rather exotic figure in the jewellery trade, and has been given the additional predicate ‘pure’ to make it clear that the topaz, not the quartz topaz, is meant. And it is still waiting for its comeback to this day.